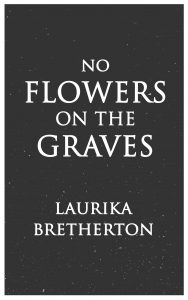 No Flowers on the Graves is a tale of love, racism and redemption. Set in South Africa during the country’s first democratic elections, the story deals with the agony and complexity of love crossing the barriers of culture and race.

Symbolic of the country’s struggle to find a path to peace and reconciliation, three lives intertwine as they try to forgive themselves and each other for unspeakable actions, while facing an uncertain future.

Can they overcome their prejudices and find happiness or will history continue to repeat itself?

In her stellar latest, Bretherton explores love, racism, and redemption. Set in South Africa during the country’s first democratic elections as the country struggles to find a path to peace and reconciliation, the story is set in motion by a single incident of robbery. The lives of three people—Ronel, a young white woman who struggles with her personal prejudices and trauma; Kobus, a broken man trying to deal with his guilt; and Mandla, a black lawyer, in search of retribution—intertwine after a bookstore robbery.

It’s a powerful, socially conscious work that explores the politics of hatred, division, and racism, and at the same time a story of love and betrayal, a story of a man who in his pursual of his brother’s killer gladly oversteps the boundaries of humanity, and a story of forgiveness and retribution.

Bretherton’s powerful, scarred but courageous lead will stay in readers’ hearts for long.

The novel deserves a wide audience.”